The Kunsthaus Baselland in Muttenz and the Kunstmuseum St. Gallen have closely cooperated on two exhibitions that focus on central aspects of the work of Marcia Hafif (*1929, Pomona, CA, lives in Laguna Beach and New York) from different perspectives and offer an overview of her oeuvre for the first time.

Marcia Hafif is among the most important American female painters; her work had an early impact on European art. From 1961 to 1969 she painted in Rome in the tradition of American Hard-Edge painting. On her return to the United States, she continued her conceptual examination of color and structure in the panel painting, which her work exemplifies. A defining aspect of her oeuvre is the fact that she freely and experimentally altered the conditions for using industrially produced paint.

“I was experimenting. Not knowing where I was going.”

“Radical painting” stands for a monochrome style of painting that examines the pure effect of color on a canvas without any pictorial character. Even though Marcia Hafif does not like this term to be used for her own work, it can be traced back to her. Invited by Thomas Krens to exhibit at the prestigious Williams College in Williamstown, MA, in 1984, out of solidarity she assembled twelve painters with similar approaches, including artists well known in Europe such as Olivier Mosset and Joseph Marioni, in the exhibition Radical Painting.

Since the 1960s, Marcia Hafif has created impressive series of works that have fundamentally examined the possibilities of color field painting and continually expanded them to include new aspects. To do the unexpected and experimental was her trademark, so to speak.

An Extended Gray Scale (1973) with 106 paintings is one such series, as are the famous Black Paintings (1979/80), in which she achieved a deep black by layering ultramarine blue and burnt umber. Her latest series of Shade Paintings (since 2013) stand alongside her two-tone, vertically divided TGGT series (Tomatoes, Grapes and Green Tea; 2006) in an empirical  approach to the golden ratio, as well as the brilliant transparent colors of her Glaze Paintings (1995).

The exhibition also expands to the field of drawing: her practice of filling a sheet of paper with short vertical strokes and measuring the time required to create them represents a technique that Marcia Hafif continues to pursue today alongside her other works. iPhone photographs from 2017 taken in her studio in Laguna Beach create a link to the conceptual black-and-white photographs of the Pomona Houses from 1971, in which she photographed a series of forty-five houses in her birthplace in a strict frontal perspective. 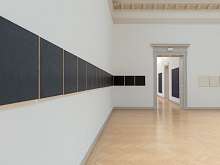