Where is Rocky II? - Promotional Occurences

In a solo exhibition at the Lokremise in St. Gallen, the French Oscar winner, artist, screenwriter, and director Pierre Bismuth (*1963, Neuilly-sur-Seine) will present a series of trailers from his most recent star-studded film Where Is Rocky II? A video installation at the center of the exhibition, which was specially tailored to the specific architecture of the Lokremise, will show the story of the search for the mysterious object  Rocky II by the renowned American artist Ed Ruscha (*1937, Omaha, Nebraska).

The fast-paced film with stars including Robert Knepper and Milo Ventimiglia mixes cinematic genres with a wonderful sense of humor. Ultimately, the story is an homage to screenwriters, who first invent the world of Hollywood before the directors and cinematographers create the corresponding images.

Where is Rocky II? will be the point of departure for the exhibition at the Lokremise. Pierre Bismuth changes roles, analyzes his own film and its construction, and becomes the high-profile conceptual artist who was invited to St. Gallen. The exhibition at the Lokremise was created in close cooperation with the Kinok, where the film Where is Rocky II? will be shown in its entirety. 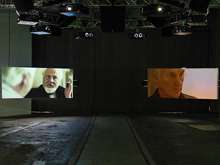