In the movie industry, “body doubles” are actors who stand in for the lead actors in physically challenging situations such as nude scenes. But instead of stand-ins, the exhibition Body Doubles points to the body as a sculptural volume, as a physical presence in space, or as a negative space that surrounds the body. The tension between the two is what the exhibition at the Lokremise makes visible.

It is centered around a first-rate group of works by Hans Josephsohn and Franz West from the significant collection of the St. Gallen collector Ursula Hauser. For the first time, these two artists will be juxtaposed in an exhibition.

Hans Josephsohn (1920–2012) is the most important sculptor of his generation in Switzerland. His work is distinguished by the original power and physical presence of the figure. Franz West (1947–2012), one of Austria’s most extraordinary sculptors, became known in the 1980s for his Passstücke (Adaptives), whose organic forms, attached to the body as prostheses, now manifest their potential as negative forms. In his later work, he turned toward the monumental organic form, which he always interpreted in his own playful manner. Large-scale installations by Pipilotti Rist and Urs Fischer augment this unique dialogue of bodily sculpture . 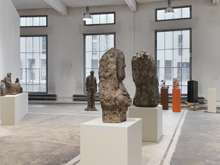