From 4 November 2017 to 11 February 2018, the Kunstmuseum St. Gallen will be presenting a retrospective of the St. Gallen artist and Manor Art Prize winner Georg Gatsas (*1978 in Grabs). The exhibition, his first solo show in an art museum, is being planned in direct collaboration with the artist and will offer an in-depth look at his current work.

Georg Gatsas uses an interdisciplinary approach that focuses on how sound, memory and public spaces interact. A nomad in a globalized world, he travels between different urban landscapes and captures individuals in their surroundings in his portraits. Global cities such as New York, London, and Johannesburg are important reference points in Gatsas’s life and work. The subcultural music and art scenes represent the zeitgeist and point to the present moment. Historical and sociological references in music and art provide further impetuses.

Over the past two years, Georg Gatsas has worked on multiple series of photographs simultaneously. This has resulted in portraits with a haunting presence, which come together to form a coherent whole in the exhibition. The presentation in the first room of the exhibition brings together the artist’s most recent photographs from Johannesburg, which are being shown for the first time and were taken as part of a studio grant from Pro Helvetia Johannesburg in 2016 and 2017, as well as photographs from the London series Signal the Future and the Swiss series Post-Migration. Music is the common thread that links the subjects’ political agendas, production and distribution sites, and performance venues. In the second room of the exhibition, the atmosphere intensifies with night scenes, mainly selections from the London series Signal the Future and the New York series Five Points and The Process. The vibrating rhythm is palpable throughout and underscores a dense, atmospheric snapshot of Gatsas’s work. The exhibition will be accompanied by a richly illustrated publication entitled Signal the Future. The artist shot this series between 2008 and 2017 in London. While the photographs compiled in it demand some degree of musical knowledge, the essays in the book shed light on many of these aspects. A number of outstanding authors in the fields of music journalism and cultural theory, including the late Mark Fischer, explore many of the strands that Gatsas visualizes in greater depth: urbanism, community, the underground, capitalism, networked futurism, gentrification, and more.

In recent years Georg Gatsas’s work has been shown in numerous exhibitions in Switzerland and abroad, including the Kunst Halle St. Gallen (2003), the Swiss Institute in New York (2007), Coalmine Galerie in Winterthur (2010), and in the group exhibitions Dark at the Museum Boijmans Van Beuningen in Rotterdam (2006). Further exhibitions followed under the title Shifting Identities at the Kunsthaus Zürich (2008) and the Contemporary Art Centre in Vilnius (2009), Welt-Bilder 4 / World Images 4 at the Helmhaus Zürich and Junge Kunst at the Kunsthaus Zürich (2011), Blick: Artists work with the Ringier image archive at the Aargauer Kunsthaus (2012), and Hôtel Dunkerque at FRAC Nord-Pas-de-Calais (2015). The exhibition at the Kunstmuseum St. Gallen is his first solo show at a Swiss art museum.

“I rely heavily on my own intuition and taste, but I follow events mainly through music. The music scenes that interest me—club music and pop, which are developing in interesting ways at the moment and not just nostalgically reproducing what came before—are made up of or redefined by people with immigrant backgrounds, people of color, black people, non-heteronormative people, women.” (Georg Gatsas)

A Commitment to the Young Swiss Art Scene

The St. Gallen artist Georg Gatsas is the recipient of the 2017 Manor Art prize St. Gallen. The prize, which includes a stipend of CHF 15,000, is awarded every two years in St. Gallen. It will be accompanied by a solo exhibition at the Kunstmuseum St. Gallen as well as an exhibition catalog. The Manor department store chain, which sponsors the prize, will also purchase a work by the artist.

born 1978 in Grabs, St.Gallen
lives in works in Waldstatt, St.Gallen 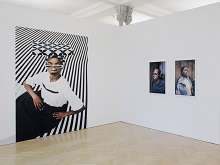