A Late Evening in the Future

The Irish photographic, video, and performance artist Gerard Byrne (born in 1969) summarizes the motivations for his work as follows: “I am working from the premise that what constitutes ‚historical‘ is constantly shifting, from one present to the next. Equally, the material I reference in the works […] doesn’t have a fixed value or significance. It reads differently at different times.”

After numerous solo exhibitions, including one in 2011 at the Irish Museum of Modern Art in Dublin and another in 2014 at FRAC des Pays de la Loire in Nantes, as well as contributions to the Venice Biennale (2007 and 2011) and documenta (13), for the first time in Switzerland the Kunstmuseum St. Gallen will allow visitors to thoroughly engage with the work of an extraordinary representative of contemporary art in the comprehensive exhibition A Late Evening in the Future. The title itself points to the various temporal levels that meet in Byrne’s large-scale works to constitute the present.

Gerard Byrne’s spectacular video installation A Man and a Woman Make Love was one of the high points of documenta (13). In the former ballroom of an upscale hotel in Kassel, visitors were transported back to the year 1928 into the middle of a discussion by a group of surrealists who associated with the poet André Breton. The reenactment and the spatial presentation of the multipart projection conjured up a conversation on eroticism—with the viewer as a participant in the illustrious (male) circle.

The spatial staging of Byrne’s complex multimedia works has long been one of his primary interests. This allows him to go far beyond the usual conventions of video works, which are usually shown in a continuous loop in a black box. Instead, in their spatial structuring and temporal sequence, his installations approach performative works and point almost incidentally to the proximity of Byrne’s video work to theater. This becomes evident particularly in his repeated references to Bertolt Brecht’s epic theater or his use of dissociative effects like those that echo in the apparent temporal breaks and multiperspectivity of Byrne’s unconventional narratives: “I’ve always been interested in making video works that somehow can’t be wholly consumed. I mean that [….] more in sculptural sense. Even though I’m working with two-dimensional imagery, and by definition video is linear – one frame follows the preceding one – I work at exploiting possibilities around the idea repetition and difference in a fundamental sense. I make multiple edits from the same material, and I play around with the patterns by which these edits are relayed in a gallery space.” (Gerard Byrne)

The artist has repeatedly dealt with historical events, which he translates into the present in elaborate productions with an ironically distanced perspective, while at the same time revealing fundamental cultural and social conditions. These include interviews from Playboy magazine from the 1960s and ’70s, which served as the basis for the large-scale installations New Sexual Lifestyles (2003) and 1984 and beyond (2005–07). Like in the work at documenta, which is based on a conversation published in 1929 in the magazine La Révolution surréaliste 11, the artist deconstructs the patriarchal structures inherent in Western culture through questions of eroticism that are discussed only by male protagonists. At the same time, various temporal levels penetrate one another and shift as various social codes of our bourgeois society meet like in a cinematic collage. In 1984 and beyond, for example, these include typical 1960s suits in a modernist post-war interior in which the protagonists discuss the distant future of humanity, which the exhibition visitors in turn follow in their own present. By contrast, the apparently ironic work Why It’s Time for Imperial, Again (2002) features a conversation between the singer Frank Sinatra and Chrysler Chairman Lee Iacocca that was published as an advertisement in an issue of National Geographic, in which the two discuss the merits of the new Chrysler Imperial in front of dismal industrial ruins.

From the surrealist milieu to visions of the future, economic decline, and the Loch Ness Monster, Gerard Byrne’s multimedia work essentially always questions the story behind the stories: “Working as an artist allows me to address the more abstract, systematic character of the construction of histories instead of presenting or reappraising what’s deemed marginalised.” (Gerard Byrne)

born 1969 in Dublin, Ireland
lives and works in Dublin 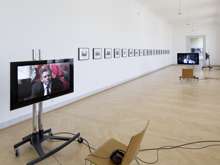 Works in the exhibtion