Icons from the Gürtler donation

With an extensive donation, in 2013 the Kunstmuseum St. Gallen suddenly gained one of the largest and most important institutional collections of icons in Switzerland. In the exhibition Saints, Miracles, and Visions, the highlights of this singular collection will be made accessible to the public for the first time in an unusual contemporary presentation designed by the artist Gerwald Rockenschaub.

The extraordinary donation from Dr. René and Lotti Gürtler comprises a group of works that is unique in Switzerland: over 150 icons from the post-Byzantine period, some 40 small antiques, some of which are of Byzantine origin, and a Slavic liturgical manuscript as well as a dozen Western European sculptures of saints from the 14th to the 17th centuries. The Orthodox devotional images mostly come from Russia and Greece, but the magnificent Gürtler Collection also includes examples from Ethiopia and Romania. For more than five decades, the former physician and his wife meticulously and passionately compiled these precious works.

Icons play a central role in the Orthodox Church. Based on legends of miracles, they function as mediators between this world and the next. Due to their strong ties to the Byzantine pictorial tradition, they developed in a variety of ways in the regions of the Eastern Church after the fall of the Byzantine Empire: protected from Western influences by geographic and political distance, icon painting presents a self-contained universe of images with a particularly strong narrative element.

The exhibition at the Kunstmuseum St. Gallen brings together masterpieces of icon painting from the 16th to the 19th centuries and offers deep insights into art from the Eastern European cultural sphere. This is contrasted with sculptures of saints, liturgical religious symbols, and examples of medieval book art (loans from the Abbey Library of Saint Gallen), which make it possible to draw unique connections between East and West.

Thanks to the impressive exhibition design by Gerwald Rockenschaub, to whom the Kunstmuseum St. Gallen has simultaneously dedicated a solo exhibition, traditional icon painting will engage with contemporary art in a further exciting dialogue. 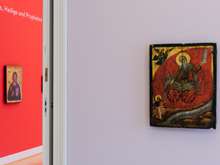