Funky Minimal: The title of Gerwald Rockenschaub’s radical presentation in 1999 at the Kunstverein Hamburg is meant programmatically and points to the cool aesthetics of Minimal Art, which takes a decided turn here toward pop culture. With blueberry fields (orphaned selec + 1) he has conceived an exhibition for the Kunstmuseum St. Gallen in which installations and individual works are distilled into a precise sequence.

Gerwald Rockenschaub, who was born in 1952 in Linz, was originally a proponent of the Neo Geo movement, and he became one of the leading representatives of Institutional Critique at the latest with his participation in the 45th Venice Biennale in 1993, where he deconstructed the Austrian pavilion by the Jugendstil architect Hans Hoffman with a radical intervention. His installations and transformations of exhibition spaces have made him a master of staging who fundamentally reflects on the conditions of exhibiting visual art and provokes surprising shifts of perception with often minimal interventions.

Gerwald Rockenschaub’s interventions have been featured in numerous solo exhibitions at institutions around the world, including the Lyon Biennale in 2001 and documenta 12 in Kassel in 2007. In recent years the artist, who also worked for many years as a successful DJ in the club scene, has turned toward digital imagery and the variations of global communication with its ‹war of signs› (Brüderlin). In an exhibition at the Kunstmuseum Wolfsburg in 2011 he condensed his computer-designed creations into an impressive all-over work composed of digital symbols. In short: Eye Sex!

born 1952 in Linz, Austria
lives and works in Berlin

Further information on the artist is available here. 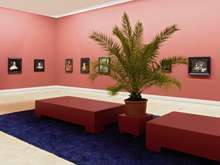