That’s a God-forsaken place; but it’s beautiful, isn’t it?

Olaf Nicolai’s (*1962, Halle an der Saale) works have been featured in numerous international exhibitions, from documenta to the Venice Biennale. The landscape, one of the most complex themes in the history of art, is a leitmotif in Nicolai’s work. For the Lokremise St. Gallen he has designed a walk-in environment that could be a desert or a lunar landscape—as alluded to by the quotation that gives the exhibition its name, uttered by American astronaut Charles “Pete” Conrad Jr. on 18 November 1969 during his time on the moon. Nicolai creates a barren, utopian landscape in which multiple levels of references overlap and condense. Central to the work are the shifts in the relationship between the body, space, and movement, and especially the imaginations thus evoked.

With encyclopedic attention, Olaf Nicolai circles around various scientific and literary fields, uses historical, political, and philosophical elements, and develops works in a technically and stylistically novel language. The starting point of the show in St. Gallen is the seemingly trivial fact that in our perception we are not simply confronted with nature; rather, perception always takes place through relationships shaped by media.
Nicolai’s installation in the Lokremise consists mainly of sand, a loose sediment that, under changing climatic conditions, forms a landscape in motion. Geological as well as geopolitical references come into play; Michel Foucault’s notion of heterotopia also comes to mind: Foucault coined the term in the late 1960s to describe transitory places on the margins of society in which social order is both represented as well as disputed and undermined. Nicolai’s barren landscape thus comes into view as an ambiguous place that can be understood in the context of current social change and at the same time sets in motion the viewer’s imaginative potential.

The exhibition begins with the work Zabriskie Point, a series of photographs taken with a stark flash at night at Zabriskie Point in Death Valley. The photos document a nocturnal, almost one-hour walk through the landscape in which Michelangelo Antonioni’s film of the same name from 1970 stages utopian scenes of free love and dream sequences. When visitors begin their walk through the landscape in the Lokremise, they can pick up a hand-sized meteorite. It is this small extraterrestrial object that, in Visitor, be my guest, presents our relationship to the environment from another perspective.

Another element of the installation is the previously unpublished texts by Simeon Wade, a resident of California, who visited Death Valley in June 1975 along with Michel Foucault. Passages from Wade’s texts about their stay, including an interview with Foucault, relate to a special experience: along with Wade and his friend, Foucault first took LSD at the symbolic Zabriskie Point.

Nicolai’s exhibition will also extend to the Kunstmuseum St. Gallen. Drop-shaped objects made of transparent glass are scattered across the floor of various exhibition spaces. As optical instruments that concentrate the surrounding space into a single point, the glass drops reveal a reflexive puzzle about the reciprocal relationship between isolation and belonging, closeness and distance. In a subtle way, the work Echo spans the coordinates of space and landscape with the person—both the visitor and the artist, since the total volume of all the glass drops corresponds to the volume of Nicolai’s body.

The show That’s a God-forsaken place; but it’s beautiful, isn’t it? in the art area of the Lokremise in St. Gallen will take place alongside two other exhibitions by Olaf Nicolai at the Kunsthalle Bielefeld (15 June – 9 September 2018) and the Kunsthalle Wien (13 July – 7 October 2018). Together, the three exhibitions give an overview of the artist’s multifaceted work and reflect his interdisciplinary concepts of the past twenty years. In Bielefeld, the architecture of the museum building designed by Philipp Johnson will be the focus of the show; as in St. Gallen, the exhibition deals with closeness and distance, inclusion and exclusion. At the Kunsthalle Wien, Nicolai focuses on questions of “method”—a practice that not only determines his manner of working, but which simultaneously takes on the quality of a work in its own right.

While all three exhibitions examine different facets of Nicolai’s work and retrospectively reflect the artist’s interdisciplinary concepts of the past twenty years, the presentation in St. Gallen brings together both existing and new works that demonstrate the development of the artist’s oeuvre in a site-specific setting.

As part of the exhibitions, a catalog will be jointly published by the three institutions. 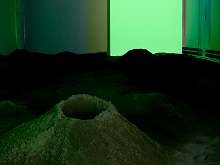